Wayne Dyer: The Changing Heart of an Inspirational Giant 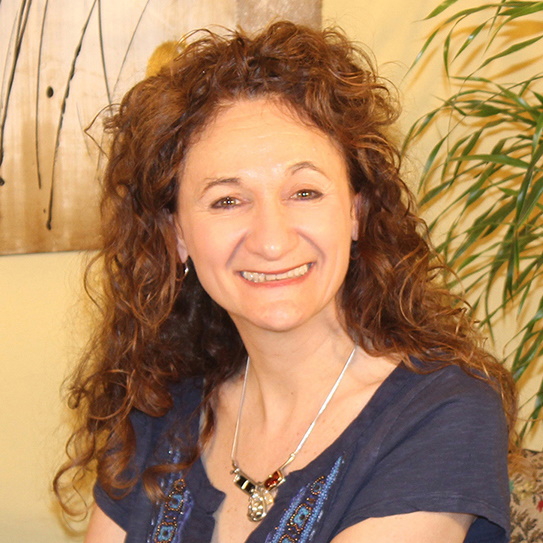 An excerpt from The 90-Day Heart Line Challenge. 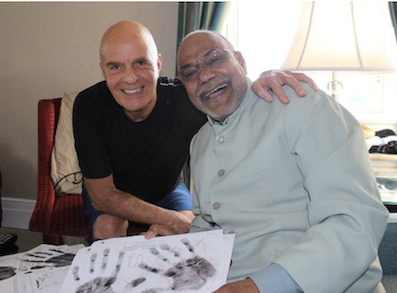 A powerful example of how a beautiful change of heart will be reflected in beautiful changes in the hand is that of former Birla Center client, Dr. Wayne Dyer, the world-renowned inspirational author, philosopher and speaker who, sadly, passed away in 2015. Through his books and lectures, Wayne encouraged us all to recognize (as I have stressed so often in The Heart Line Challenge ) that the most fundamental truth of existence is that we are eternal souls in physical bodies. Or, as Wayne liked to phrase it: “We are not human beings in search of a spiritual experience. We are spiritual beings immersed in a human experience.” Wayne believed, as I do, that we can manifest an abundance of love, beauty, success and happiness in our lives by developing our self-awareness, opening our hearts to others and always attempting to draw closer to Spirit.

And yet, for many years, happiness and unconditional love eluded Wayne. He grew up in foster homes, spent his youth in poverty and struggled with depression, issues of self-esteem and other personal demons—even after the publication of his first book, the 1976 mega bestseller Your Erroneous Zones, catapulted him to fame and made him a multimillionaire. It was only when he experienced a change of heart, or what he called “the shift”, that he began following a profoundly spiritual path, a path that led him to unconditional love and happiness. This state of contentment permitted him to use his fame to express what was in his heart to a wide audience and to inspire millions of heart.

Both Ghanshyam and I had the privilege of knowing Wayne and were fortunate to meet with him at two very different periods in his life. The first consultation was in Florida in 2003, the second was a dozen years later in Ottawa in 2015, just a few months before his untimely death. The handprints taken during those readings dramatically illustrate how a change in heart will inevitably be reflected in changes in our life, in our love and in our hand.

In his “before” prints, taken in 2003, Wayne has many beautiful wisdom signs, including a magnificent “triple” Ring of Solomon on his Jupiter mount, which reflects his profound understanding of human nature and extreme sensitivity to the feelings and problems of others. Additionally, a well-formed Love of Truth line on his Mount of Saturn is the hallmark of a benevolent, wise and compassionate philanthropist engaged in an unwavering spiritual quest for self-awareness.

Also, his “before” print displays a beautiful, long heart line opening into a fork, revealing a deep connection to his feelings and a strong desire to express his love. However, one branch of the heart line is turning downward towards the head line, reflecting an emotional reservation and a mistrust of others due to past hurt and disillusionment. In short, Wayne’s “before” heart line reflects a tendency to be deeply disappointed when his love is not returned or when his expectations of others are not met. Wayne later confirmed this had indeed been the case with him for a good part of his life—that he had often felt let down in relationships and that his disappointment had disrupted his equilibrium and negatively impacted his personal happiness. 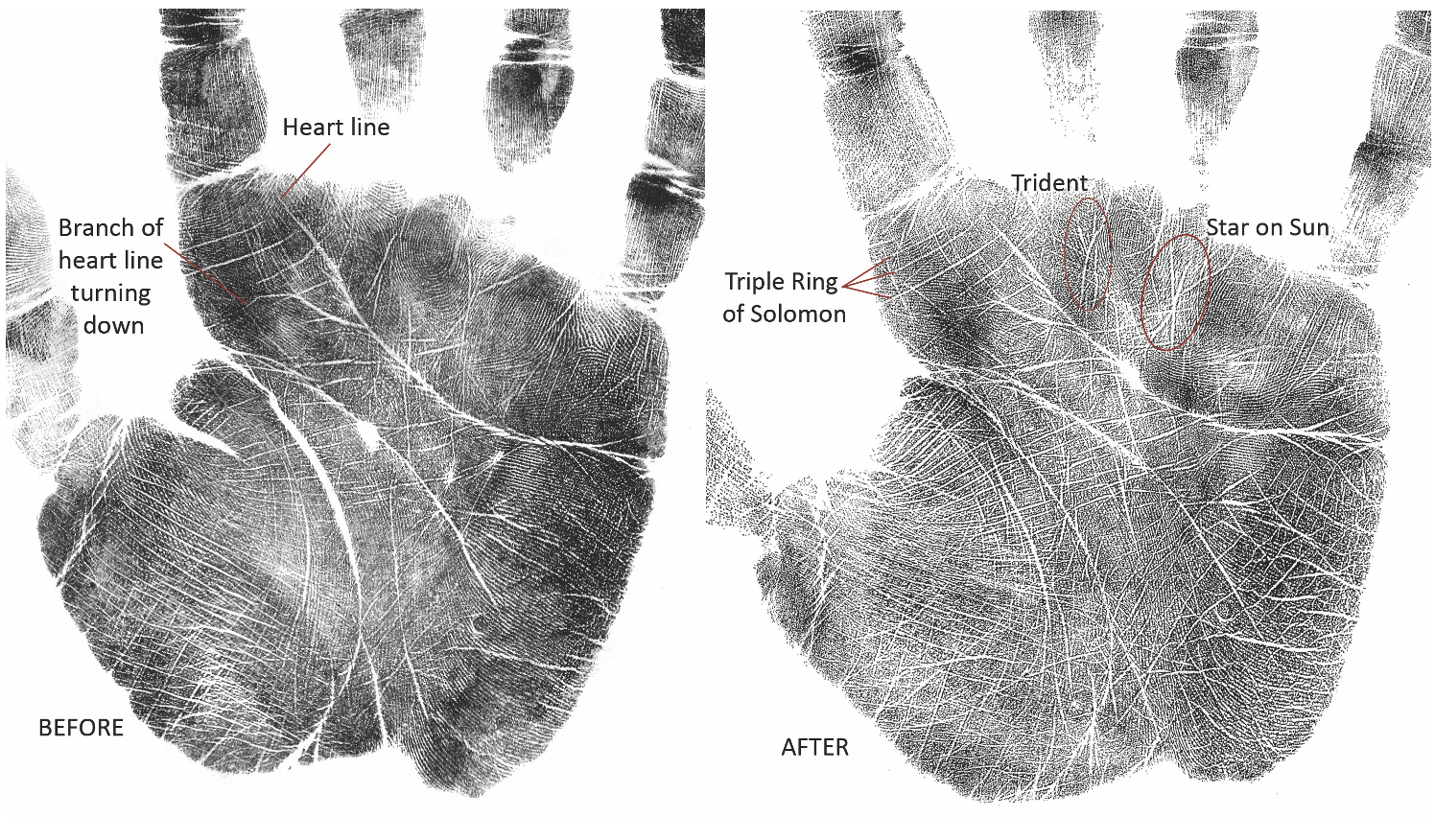 However, not long after that Florida reading, Wayne embarked on a deeply spiritual quest to open his heart center—he embraced Vedic philosophy, committed to a daily practice of both yoga and meditation, and followed many of the same steps we have taken throughout The Heart Line Challenge. Everything Wayne did in the years between our two consultations was done with the deliberate intention to better contain his ego, elevate his soul, deepen his self-awareness, get in touch with his true self, ignite his heart chakra, break down barriers separating him from others, lift his energy toward Spirit and develop his ability to express love unconditionally. In other words, Wayne did exactly what we have just done—he set out on a journey of love across the heart line . . . and what a successful journey it was!

In his “after” handprints, taken during his second consultation in 2015, his lines clearly show that all his former emotional reservations have melted away, and that his heart has expanded and grown. This is seen in the two strong heart line branches travelling upward toward his Jupiter mount, revealing his deep conviction to love unconditionally, regardless of how other people treated or responded to him. It also reveals a powerful inclination to be gentle and sensitive in matters of the heart, and is indicative of his growing sincerity, trustworthiness and willingness to openly share his love and wisdom—both in his relationships and with the world.

His extremely idealistic nature has been fully realized and put into practice, allowing him to unreservedly reach out to others through the kindness of his heart and the profound wisdom of his caring words. As a result, during the last decade of his life, Wayne was able to touch millions of hearts and effect positive change in the lives of people around the globe. His books, recorded lectures and many ongoing philanthropic endeavors are a living legacy of a life dedicated to expressing and sharing love unconditionally.

The beautiful change of direction, or shift, in Wayne’s heart is also confirmed by the star on his Mount of Sun, reflecting an empathetic heart devoted to helping and serving others, and his brilliant ability to convey spiritual concepts to the world. His Love of Truth Line on Saturn in his before print has turned into a trident, showing he no longer is seeking truth but is living it.

At the end of his second consultation, Ghanshyam told Wayne that the changes in his palms revealed that his heart and his consciousness were moving toward spiritual enlightenment. Wayne smiled and said: “That is my purpose in life—to shift my own consciousness to a more loving and spiritual state, and to help others to do the same. Ghanshyam, you have no idea how happy you’ve made me today!” He encouraged us to publish his handprints if they could inspire others to change their hearts, which, I sincerely hope, they are doing right now as I share them with you. Wayne’s last words to us were: “If my prints can help one other person, then share them with the world!”

The lines in our hands are a direct reflection of our thoughts, attitudes and behaviour. Once we have gained a better understanding of ourselves through the study of our lines and signs in our hands, we are capable of taking positive steps to change our thoughts and improve our lives. Our years of experience have taught us that, in most cases, it takes a minimum of 90 days to develop new lines in the hand and to make permanent, positive changes in our thought patterns. This is why we have created our three 90-Days Challenge Programs: The Heart Line, The Head Line and The Life Line.